I came home from work on friday to my housemates (right) discussing a plan for something to do over the weekend. After pondering on various weekend breaks such as Bath, Isle of White and Edinburgh; conclusions drew to the picturesque Lake District. I have been to the lake district once before and was more than happy to go again at a different time of year. We searched for accommodation on the internet but everywhere was fully booked for the weekend so it was decided we would just drive up anyway with fingers and toes crossed.

We left at 10 in the morning on Saturday from Leamington and it took a little over 3 hours to reach Windermere.  Those 3 hours were valuable lesson planning time for me as would the 3 hours on the way back.  Pretty much within the first half hour after arriving we found ourselves a place to stay for a reasonable price (B+B: £25 a night per person) and walked to the tourist centre to plan our stay.  Some how, completely random with the tiniest odds ever; i bump into my ex girlfriends (Jess) family in the tourist centre?! They live no where near the lake district either! Ash (Jess' sister) and Rob (Ash's boyfriend) it turned out were there for their one year anniversary romantic weekend and had planned to meet her dad in Windermere.  After quick chats we confirmed numbers and suggested meeting up later for drinks.

On arrival to our B+B we were greeted by the loveliest, particularly large lady and uber friendly and somewhat larger husband. This in theory and quite famously is the typical northerner.  Bubbly, friendly and extremely welcoming; i absolutely love the typical northerner! We dropped our bags and headed out for coffee (above photo) so we could sit down and plan our stay.  Flicking through leaflets from the tourest centre we concluded that we had to do both a scenic drive to Keswick and a leisurely cycle around lake Windermere.

The drive to Keswick, which we did that evening, was stunning but there is something about being in a car and behind a window that takes a little away from it all.  The hassle of having to pull over to really take in the views meant that we didn't actually bother stopping at all until we reached Keswick.  In Keswick we simply just roamed the shops and ate dinner.  Even though the coast is so far away, fish and chips were seeming to be the thing to eat in the lakes.  If the fish was pike i would have some understanding but Haddock was the "fish of the day" and that certainly did not come out of Windermere!  That night we met up with Ash and Rob (above) for drinks back in Windermere and invited them to join us on our epic bike ride the next morning.

A reasonably late night followed by an early cold morning did not start us off well, though the typical B+B full english gave us the kick start we needed.  Romain being straight from france just a few weeks back, i have been telling him about all the traditional English foods he must eat.  Fish and Chips last night and a Full English this morning were two massive ones for him to tick off. 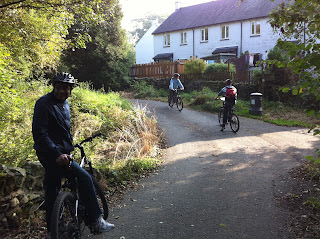 We hired our bikes not far from where we stayed and they kitted us out completely with maps, recommended routes and directions. Our chosen route was 18.7 miles around lake Windermere and was claimed to be a nice 3 hours round trip. We left at 10:30AM and arrived back at 4:30PM with Sandeep MIA. Ok so i happened to be the one landed with the job of map holder (right) but surprisingly this was not why it took us so long!  Simply, my gosh it was haaaard work.  I am no cyclist but i would like to think i am in a somewhat healthy condition; but the lakes are not known for their easy going flat lands.  I learnt very quickly that bike seats only remain comfortable for about half an hour (possibly the maximum length of time i have ever been on a bike before) and that cycling through muddy puddles gets nobody else wet but yourself.  This being said, there was no other way we could have seen such amazing views (below).  Further more, the weather could not have been better, it was absolutely beautiful. 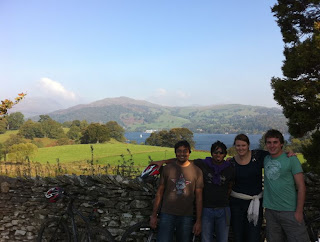 We cycled through parks along side the lake (middle left), over the lake, through little villages (left) and even to Beatrix Potters house (below left)!  Ok so i wasn't terribly excited about Beatrix Potters house but it was on our route and was a good excuse to get off the bike and give my bruised backside and jelly legs a rest.  I complain but the bike ride was without a doubt the best part of the trip and such a great experience.  After finally getting back, all sporting a perfect vertical line of mud splatter up our backs, we headed straight out for dinner as it occured that we hadn't really eaten since breakfast.  Though we did have a brief stop at some cafe for tea and cake mid bike ride.  After we dropped our bikes off, we just went out for dinner (nothing worth writing about), said our goodbyes and headed back down south.  It was less than two days but it ended up being a great little break away getting to know my new housemates better and randomly spending time with old friends. I do like the Lakes... :o)