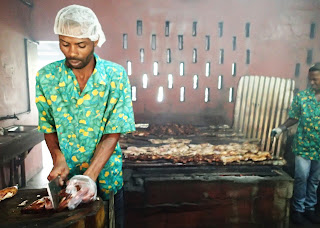 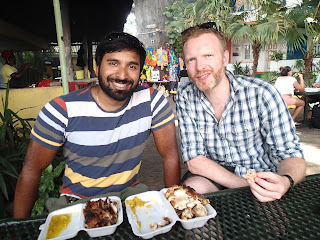 I didn't realise that Jamaica have their own language.  I just thought it was a ridiculously strong accent as it is all in English but I understand none of it.  We are here to visit Camille; a colleague and friend who is from Jamaica.  I understand her English completely with little difficulty at work in China.  Now, on her home turf, a switch has been pressed and she's firing out completely random made up syllables from her verbal machine gun and telling me she's still speaking English.  This is the language of Patois; English but faster, louder and way cooler.  What does the title of this post say? it says "That is how we do it!".  Simply say it faster, louder and cooler and you've got it!  Camille picked us up in our hired car from the airport and drove us straight to Scotchies; a renowned Jerk centre.  A woman after my own heart!  It turns out that what I have known and learnt about Jerk Chicken has been all wrong.  I knew that the flavour was 80% cooking method and 20% marinade but I had the cooking method completely off!  In fact, to replicate an authentic Jerk Chicken in the UK would be nearly impossible as it is highly dependent on the locally grown sweet wood logs and a slightly more laxed hygiene policy.  Cooked over these charred logs and covered with a corrugated sheet of metal is not even close to the caribbean Carnival method in England.  With their home made hot pepper sauce and a styrofoam cup of rice 'n' peas it's flippin amazing. 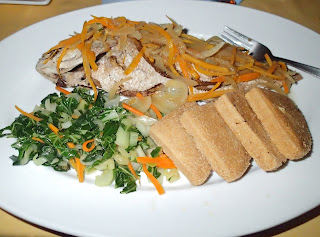 This was our chill out week of our trip as all the driving and moving around in America had really took it out of us.  Chilling in our apartment in "Ochos Rios" with a communal pool area and a belly full of Jerk is what dreams are mad of.  Camille is a fellow Maths teacher and so I have been chewing her ear off and planning my meals for the past few months.  I already knew that dinner had to be fish escovitch; a dish I didn't even know existed before Camille enlightened me.  Fried fish smothered in a sweet but sour onion, pepper and carrot mix that soaks into the flesh.  With a side of bammy; a fried cassava flatbread.  Sat in a beach side bar drinking Red Stripe and finally eating food that oozes freshness I am starting to wish I put aside a few more than 6 days to bathe in such bliss. 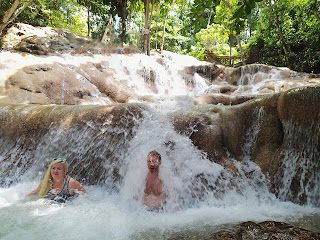 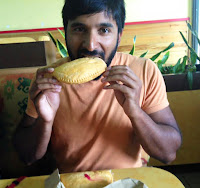 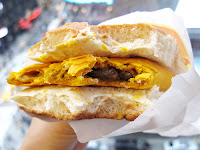 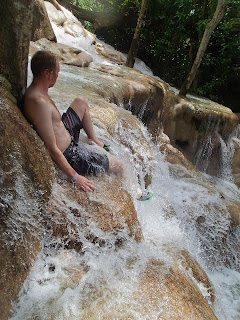 The following morning we did a quick grocery shop to fill our cupboards, grabbed a Juici Patty (national dish!!) and headed to Dunn's River.  How does such a small island have so many dishes to call their own?  I have hit three big Jamaican staples in just a day and half and there's still loads to go.  A beef patty is spicy minced meat enclosed in a light, fluffy pastry; a perfect snack.  Further wrapped in coco bread you've got a pretty hefty meal.  Dunn's River attracts all tourists with its climbable waterfall and with insider knowledge (Camille) we bought wet shoes for a fifth of the price at the market before arriving and got in on local prices!  Great fun for the slightly brave.  For the evening I ticked off an actual life goal... swimming with bio-luminescent plankton!  Camille had no idea that one of the worlds best places to experience the glowing waters was in Jamaica.  The bay is called glistening waters and you arrive, pay a ticket for a boat and wait for night to fall.  It is a public bay so I am sure you can just swim in it for free but it was nice to go out into the middle by boat.  And ofcourse, something so amazing, is nearly impossible to take great photos of.  It was like swimming in the waters of Avatar.  The plankton react to movement and so simply swimming lights up your entire body with a blue glow.  You certainly couldn't discreetly go skinny dipping.  It is an extraordinary and sureal experience and I would come back to Jamaica just to do it again. 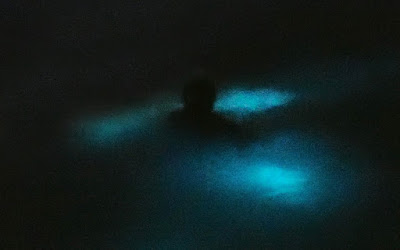 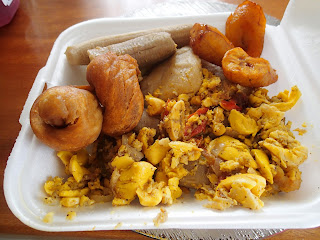 We started the day well with Camille going out early and bringing us back the national dish for breakfast.  She insisted that there is never anything left if you don't go early.  Jamaica holds the title of the only National Dish in the world that can kill you.  Ackee is a fruit in which if not ripened completely has high levels of a poison called hypoglycin which pretty much makes you vomit out your insides.  Apparently everybody has their own trusted Ackee seller as simply buying it from the street is just too risky.  Putting my life in Camilles hands, I ticked off National Dish number 25; Ackee and Saltfish.  There's no major taste to it but I don't know anything that has a texture similar to it.  It kind of feels like scrambled egg in your mouth until you start chewing and then it is thick and creamy like custard.  The first few mouthfuls take you a little off guard but then it tastes beautifully savoury with scattered bursts of salt fish.  Well done Jamaica for picking a solid National Dish. 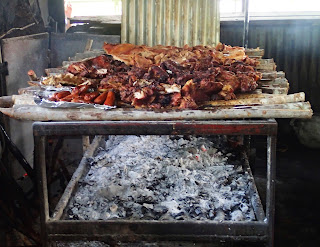 Our luck continues as we are here during "Sum Fest" which is an annual Reggae Festival in Jamaica.  It goes on for a few days but Camille recommended (insisted!) that we go to the Dancehall Explosion which starts at 10pm and finishes at 6am!  So that left us the day to relax and prepare for a ridiculous all nighter.  Of course, we did not rest at all, we were out all day in Mo' Bay meeting Camilles family/friends, eating at the Pig Pit, visiting a bird sanctuary (Chris loves a bird!), eating another Scotchies and picking up Jordan from the Airport.  Arriving back at our apartment to get ready late evening; the back of my eyelids were quickly becoming more and more interesting.  In fact, I couldn't take my eyes off them for the entire hour journey to the festival.  This is going to be a loooong night... 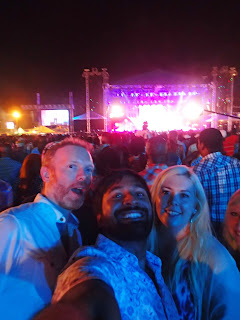 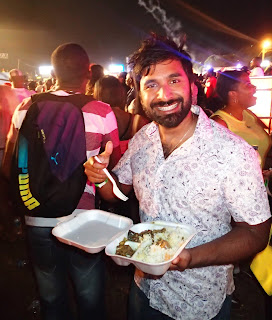 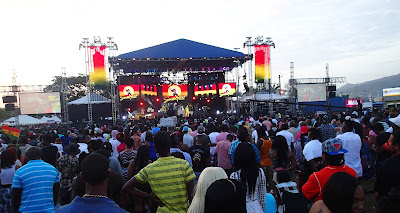 And then you walk by the men selling weed on a stick, past the thousand chair sellers (totally should have bought one) and through the gate (metal detector!) in to the most amazing pumping atmosphere of all time.  It is incredible; Dancehall music has the ability to put my nana in a party mood!  The night went quickly and before we knew it the sun was out and the headline act, Lady Saw, was on stage grinding with a security guard.  From the few words that I could recognise I learnt that there is just one theme to Dancehall music... absolutely everything and anything to do with sex.  No boy meets girl love story in these tunes, just very descriptive and animated ways of doing the rude thing.  A bottle of rum, bottle of coke and a cup of ice fueled 5 of us each round and was surprisingly cheap.  I managed to put away a whole tray of Curried Goat and white rice at about 4am and remember thinking that it was the best curry I had ever eaten in my life.  I felt completely safe the entire time (as did the girls) and would thoroughly recommend it.  Low and behold, pretty much absolutely nothing happened the next day.  We got back to our apartment at 8:30am and passed out until late afternoon in which we simply saw the rest of the day through by the pool. 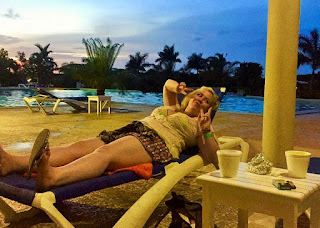 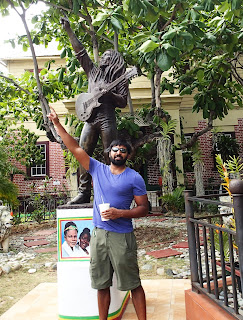 Fully recovered we had a mini road trip planned to Kingston to visit Bob Marley's house.  Not quite Graceland but still interesting.  Most rooms were cleared from anything belonging to Bob and replaced with information pasted on to the walls and the odd glass cabinet of artifacts.  It felt a little too far removed from being a home and a little to much like a museum.
Camille: Du nah nyam tuh much. Wi av Jerk lobsta inna howa.
Me:  I won't I'll just have some Mannish water
Camille: Ah gud fi de man bak
Me: Sorry, what? 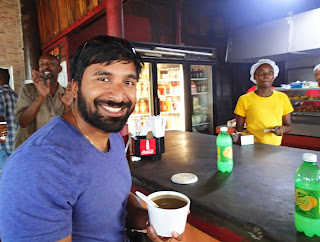 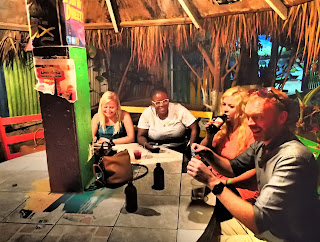 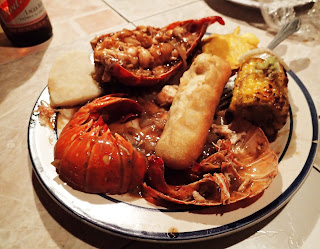 Mannish water has been talked about for a long time before coming out to Jamaica.  It is a soup made from goat head and entrails and is apparently good for the male libido.  Hence its name and its popularity amongst Jamaican men.  There are interesting rules with food here; "don't make eye contact when eating a banana" is probably my favourite...  Anyway, the manliest water I have ever drank also turned out to be the best soup I have ever had.  The most amazing umami taste with melt in the mouth "meat" and a low hum of scotch bonnet.  And what did it do for my "back"... umm... well nothing that I noticed.  The Jerk Lobster on the other hand!.. Now, if anything was going to be good for my back, this was hands down the best meal I had eaten this year.  We drove down to "Little Ochie" in which Camille knew a popular beach side seafood restaurant.  Two whole lobster tails to myself, cooked in a sweet, spicy, Jerk sauce and served with all the amazing sides known in Jamaican cuisine;  Bammy, festivals, fried plantain and Jerk grilled corn.  All for around £14 each including several bottles of beer.  Now that is what I call 'gud fuh mi bak'! 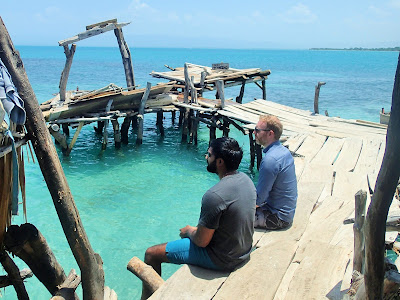 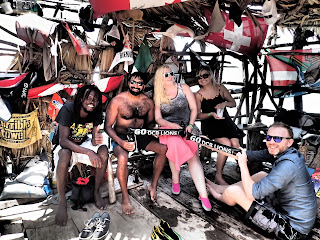 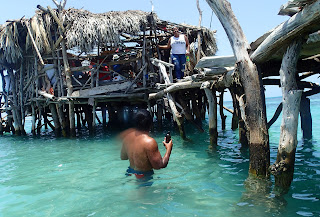 My final day in Jamaica didn't disappoint. One last recommendation was to go to the Pelican Bar.  I almost don't want to advertise it on here as it was its lack of popularity that made it so charming.  A bar built up out in the middle of the crystal blue sea; where Jamaican men play dominos, dangle their legs in the warm sea and drink cold bottles of Red Stripe.  We went at lunch and spent the best part of the day there in our swimming trunks.  The boat to get there is where tourists get stung so be careful.  We were with Camille and so had no problem.  We learnt how to swim with a beer in our hand and created a new game called crab roulette which involved catching a crab; standing in the water in a circle with your eyes closed; putting the crab in the middle and seeing who it swims to and climbs up.  It doesn't sound so bad now I'm typing it but man it was terrifying!  It always went for me!  It was a racist crab; I look more like a log underwater...

There is no denying that this would have been a very different holiday without Camille.  If you really want to experience how beautiful Jamaica is, get yourself on tinder and keep swiping until a Jamaican comes up.  :o)