As i am studying my PGCE at the University of Warwick, an opportunity has come up.  I have just sent off an application to teach Maths in africa for the summer term.  The whole trip and experience is paid for by the university, including spending money and weekend trips.  There are a lot of applicants and very few spaces and there seems to be some kind of interview and long winded selection process.  Im thinking the chances that i get chosen are slim but hey heres hopin.  There are three schools that i can be placed in; one in South Africa, one in Tanzania and one in Ghana.  Not quite sure on my preferences.  Anyways I find out on tuesday 2nd feb if I am invited for interview! will keep an update on here... :o)
Posted by Berny at 21:19 No comments:

So the GF at the time took me to her 'home town' so it was only fair i returned the favour! well ok my hometown would be Leicester and she would have gotten the raw end of the deal, but my family originate from Goa. 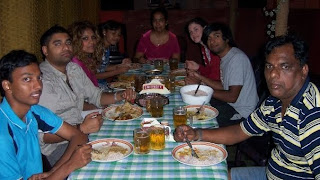 It was quite a good year for travelling for me as this was just a few months after South Africa.  Though i would have to say that the flight was possibly the most uncomfortable flight i have ever had to experience and i believe that i came very close to starvation.  On the plus side, our tickets didnt cost so much...
We arrived at my families house (who i hadnt seen for a good 12 years) in Baga and were welcomed with a big plate of lamb Somosas.  What a great start to a great holiday! My family (uncle, aunty and 2 cousins) actually own a restaurant there called JayJays, pretty much in their back garden and so good food was always on tap. 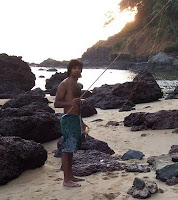 We ate soo much seafood (including lobster) and all the Goan dishes (Xit kodi, Xacuti, Sorpotel, Goa Sausage, Bebinca etc).  First day or 2 involved a lot of visiting family and family friends (which must have been rather boring for the gf) but after that we started to explore quite a bit.  We made friends with some people that owned a boat on the beach and so we often went fishing out at sea (to our horror, using fresh king prawns as bait!?) and bringing home watever we caught for my aunty to cook in the restaurant!  Cant get much better then that really, i love fishing and having ur catch cooked for you just how u want it is just sweet. 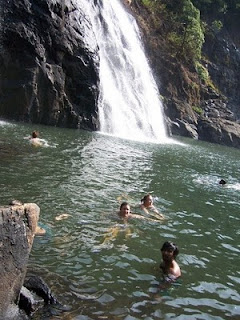 We went to a Club called 'Club Cobana' which was a very interesting take on an exotic night club! We also took a trip to the Dudhsagar waterfall with monkeys and extra cool water(right).  A lot of time was spent just relaxing on the beach, roaming around when we felt the need to, taking things as they came.  Various flee markets, and the main market, Mapusa (left) were good trips with great bargains...unless ofcourse u have your white girlfriend with you. 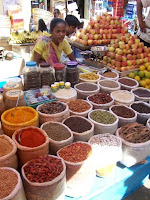 Christmas in Goa was an unusual one.  Maybe it was the idea of being away from home but also it just didnt feel like christmas.  Maybe it was the sun? or the weather in general? I dont know.  New years is supposed to be where the real fun happens in Goa, but unfortunately we had left just a couple of days before then.
Some of the best food i ate i have to say would be from a back street alley where i saw a small queue of locals at a little side stall where a man was serving curry in plastic bags and massive chapattis in newspaper (and for barely any money!).  Goa is such a relaxing and chilled place to be and because of my family connections i can see it being a place i will regularly visit.  This is not the last time Goa will be written about in this blog... :o)
Posted by Berny at 00:43 1 comment:

Well i suppose that my first proper trip, without family, would be South Africa in 2006.  My girlfriend at the time had family there and she was going for the whole summer, so we arranged for me to go visit!  what a brilliant idea, free accomodation with such a beautiful family! so i kinda rushed to book my tickets and it being the first ever plane ticket i had bought, i made a wee mistake... i booked tickets that meant i had an over night stay in Amsterdam airport and then another overnight night stay in Johannesburg airport (almost 2 days travel)! Now Amsterdams not so bad but id heard some scary shit about Johannesburg and i was absolutely bricking it getting off that first plane, waiting for my domestic flight to Durban.  However, i ended up making friends with some french people in a similar situation and we stayed up all night watching our backs and playing poker.  I lost all my Euros (from Amsterdam) but managed to keep my life and my belongings. 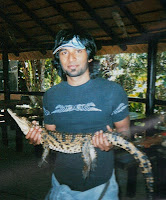 I spent three weeks with the gf and her family and seriously enjoyed every bit of it.  Was a risky idea going on holiday with a reasonably new gf (having booked the tickets well in advance aswell!), and thinking back to it it couldv gone horribly wrong!  but it didn't, and i got to experience South Africa as if i was part of a family that lived there.  Ate a lot of great food (Spurs 500gram steak, Crocodile burger, Bunny Chow, sugar cane stolen from a field) though i missed the National Dish of Bobotie.  Drank 80% alcohol "Stroh Rum" (and looked like a complete ass infront of my ex's friends after coughing my guts up having taken a shot) and had great experiences (first time i ever caught a wave body boarding at Durban North beach, went on a Safari at Hluhluwe-Umfolozi game reserve, Ushaka waterpark, shark dissection, it goes on!) and such brilliant company.  Without a doubt i will be there again at some point in my life.  Unfortunately probably not with the same company (as most of them have moved to England now!) but theres still plenty of time to do the things i missed out.  There was a problem with photos, as can probably be noticed, all i had was a silly disposable... So that was south africa as far as i can remember... :o)
Posted by Berny at 14:02 1 comment:

The not so significant trips...

Its not so much that they aren't significant, more that there not worth me writing a great deal on and uploading photos for... These will tend to be family holidays when I was real young or very short trips away.

so with family we pretty much never left the country, our only trip abroad being once to America.  Well and I have been to Goa a couple of times with my Dad but ill put that in a seperate post with some photos later.  The others are quite short trips such as Dublin (Ireland), Edingburgh (Scotland), Lourdes (France), Malia (Greece) and Cologne (Germany).

America was pretty kool, though i was probably to young (about 13 years old) to really appreciate it but i do remember it was the first time i ever saw a chinese buffet eat as much as you like! heaven... Being with the rents meant I wasnt really on much of a shoe string budget (which i never really appreciated until i went travelling without them!) so we did the lot, travelling around california.  Universal studios, Hollywood, Shamu, Disney World, Grand Kanyon, it goes on! All round pretty damn good holiday.

Edinburgh was only last year for new years eve(starting 2009) we went down for Hogmanay.  A friend has university accomodation there so we spent a couple days and nights.  Foods good, beautiful city and Hogmanay made for a great experience...

The rest, well theres not much to say really, some were school trips, some were lads holidays. All great experiences but nothing significant to write about.  :o)

So for aaages I have been trying to find a way of storing all my travels, plans and ambitions.  A way of keeping track of where iv been what iv done.  I concidered treating myself to an external hard drive to put all my holiday photos, videos and pretty much store my life on there! but reading reviews, it seems that they're not all that reliable and I could lose it all with a knock. I suppose nothing can beat a physical hard copy of a diary or photo album.  But with my intentions im gna need an infinite supply! so this is it, by final means of life storage... a blog.

The idea is growing on me actually, though there probably isn't anyone in the world reading it right now, i can see it helping me keep track of things.  Storage is my main reason, but theres so many bonuses... the idea of friends and family being able to see what i am upto whilst im away is pretty sweet.  Not really something you could do with a physical diary.  Unfortunately, at the moment there are no trips planned for any time soon.  I am currently studying a PGCE and time is just not available to spend abroad.  Though, annoyingly I am suppose to be in Lanzerote learning to SCUBA dive right now, however I said no to a free holiday as I felt I shouldnt miss the 4 days of uni that would have done.  2nd day at uni now and already regreting my decision, its looking like the rest of the week is going to be cancled due to severe weather warnings... whilst its about mid 20s on the beach of Lanzerote.  Well u can't make the correct decision everytime!

Having said that there is no time to go away, I have some how managed to find the time to start up a blog, procastination at its best is what that is.  whilst i am in this dry patch of no travelling, I will hopefully find time to start backlogging my trips and experiences until I am upto date with beautiful photos and all sorts!  im kinda depending on this blog being around for the rest of my life so I could be 80 years old and see where i went when I was 20.  and I can still be adding things to my lists.  Reality tells me that something is going to take over at some point, and probably not in the far future.  Well heres hoping it doesn't...  :o)

My abition in life is to travel the world and eat... and finally I have found a means to keep track of it all.

Its almost too late, as a lot of traveling and eating has already been done. But I figured that I am only 22 and have a lifetime of travelling left in me. :o)

For the record, i will post up my previous experiences and travels from the last few years untill i am up to date.

This is a blog of my Travels, Consumptions and Experiences...
Posted by Berny at 00:26 2 comments: