A countries food looks very different through a tourists eyes than through a residents eyes.  This is particularly true with Beijing.  As a tourist you tend to focus on the dishes you could quite easily get back in the western world - your roast duck and pancakes and your dumplings.  But what about everything else?  What do local people look forward to eating when friday evening arrives?  Now entering my fourth year living in Beijing here is my list of things to really eat here. 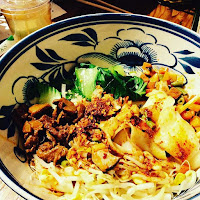 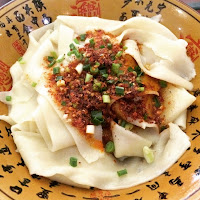 These were my favourite noodles in Beijing until I came across number 9!  Often just one extra long ribbon of noodle they are spicy with a slight numbing from the Sichuan peppers.  I good starting point for people not use to the Sichuan flavour.  Not too dissimilar to the more famous Biang Biang Mian (middle picture) but definitely tastier.  Biang Biang is only more popular because it has the most difficult Chinese character of all characters(right picture).  As far as spicy ribbon noodles go it is You Po Mian all the way!  You can find it here. 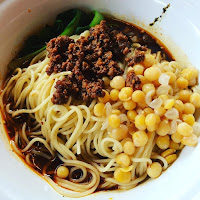 Slightly more soupy and maybe a little spicier than number 10 these noodles are the ultimate in flavour.  I do prefer a thinner noodle but the mixture of minced meat, beans and the rich spicy broth is delicious.  Hands down my favourite noodles in China.  The best bowl can currently be found above Lugas in Sanlitun. 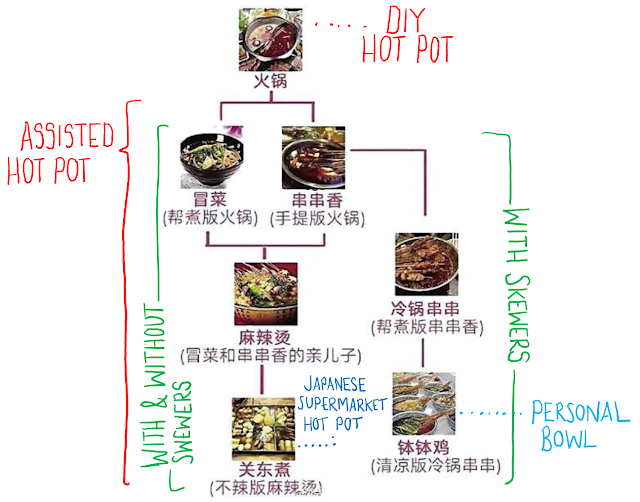 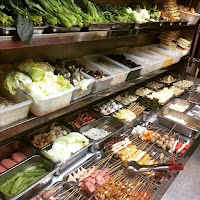 Hot pot does come next on the list after Duck and Dumplings as things you will almost certainly eat as a tourist.  But it is the type of hotpot that distinguishes a tourist from a local.  HaiDiLao is the main DIY hotpot that both tourists and locals enjoy.  But there are a ton of places to eat hotpot and a ridiculous amounts of different types to choose from.  I have translated a picture I found online to help you understand the types.  The main feature is a shared boiling pot of broth (usually with a heck of a lot of numbing spice in it!) in which you order raw foods to bathe in it.  My favourite is having your own personal lava bowl at Zhang MaMa's where you dunk precooked items and eat it with as much rice you can possibly fit into your mouth to counter the heat.  The Ma La Tang （麻辣烫）option is an easy and healthy way to get a lot of veggies down you and popular among my vegan friends.  Delicious, though less healthy, when topped with the optional (compulsory!) sesame paste sauce. 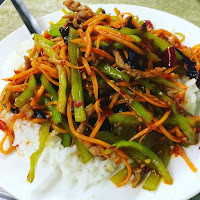 Don't be put of by the name.  It is fish fragrant which means that it just smells/tastes (in Chinese the word for smell and taste is the same!) like fish.  There is actually no fish in this dish and many would argue that it does not actually smell or taste of fish.  It is more of a hot, sweet and sour flavour with lots of veggies thrown in and of course a touch a sichuan pepper.  This dish can be found in most Chinese places and shouldn't set you back more than 20rmb. 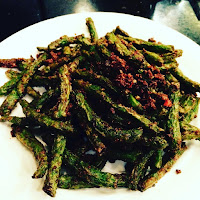 "Eat yours greens!" my mum always said.  She probably did not mean these.  Fried, salty, crispy and spicy you can try and convince yourself that these green beans are good for you.  To add to this a spoon of deep fried savoury minced pork is also in the mix.  Yum.  Like number 7 this is a Chinese staple and found in most places. 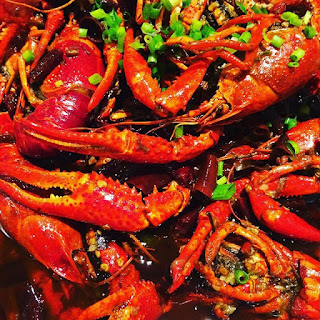 There is a whole street dedicated to this dish called Ghost Street (Gui jie - 鬼街）where 90% of the restaurants there serve spicy crayfish.  Be prepared to take a ticket and sit outside as they can get very busy,  but don't worry they will bring beer and free sunflower seeds to you whilst you wait.  I have waited over 2 hours before and even when we had finished eating, gone midnight, people were still queueing!  Once you are in you select the size of crayfish, how many you want and wait for them to bring out your crustacean tower on a tray.  Put on your absolutely useless plastic gloves and get stuck in!

Number 4: Eat some offal
I am not one to support stereotypes but world famously "The Chinese eat anything".  Now this of course is not true but they do enjoy a slightly more adventurous palette.  Whilst in Beijing I thoroughly recommend getting on board with this!  I have grown to love and understand that though flavour is important, It is texture that they adore here.    Sliced cow stomach dipped in sesame sauce is popular and prices range depending on which of the 4 cow stomachs you eat.  You can buy a bag a deep fried chicken knee caps and probably pay more than you would for a bag of deep fried chicken breast!  Knee caps!?  But the most bizarre for me has to be two separate parts of a cow that I never even considered eating.  The first one - sliced cow oesophagus; soft and spongy dipped in a spicy, vinegary sauce.  The second one - google translated to cow paddywack... What on earth is a paddywack I thought!  Further research told me that cows have an extra strong tendon, of which it's sole purpose is to hold their enormous head up.  It's most common use around the world, if used at all, is keeping your pet dog entertained for several hours as it tries to gnaw though it.  It was chewy beyond belief - like eating a hot water bottle.  I chewed for 5 minutes, took it out of my mouth and found it to be exactly the same as when it was served to me. 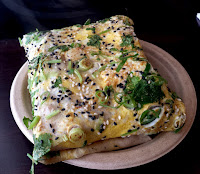 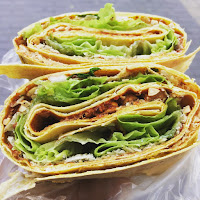 Made to order pancakes with the egg fried onto the outside.  The inside is filled with lettuce, soybean paste, chili oil (optional), spring onion and some fried crispy thing.  After that you choose what extras you want to add from peanuts to sausages.  If it costs you more than 10rmb you have been totally ripped off.  Don't worry it happens to the best of us, especially on the great wall! 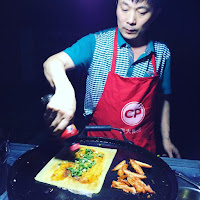 Imagine a giant A4 piece of paper sized noodle fried so it is slightly crispy, slightly chewy.  Then fry an egg onto it, slice up some spicy chicken, sprinkle on sliced spring onions and coriander and smother it in soybean chili sauce.  This thing you are imagining probably looks nothing like a Kao Leng Mian; my description is awful so just go out and buy one and try it out for yourself.  Usually found from the same street vendors making Jian Bings. 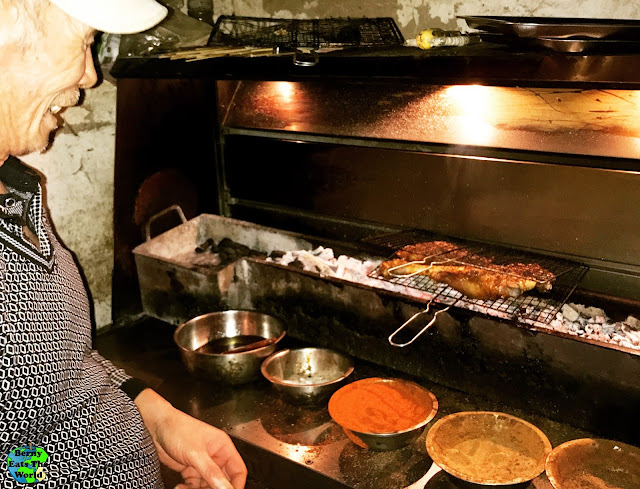 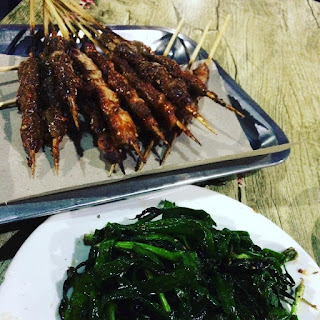 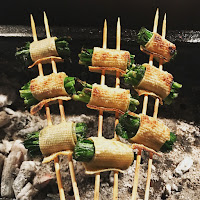 There is no real order to my list of 10 apart from the number 1 slot.  This is my all time favourite thing to eat in Beijing and you can do nothing better on a warm summers evening.  Bottles of cold beer cost 4rmb and each skewer ranges between 2-5rmb depending on what it is.  Cumin lamb skewers are probably the most popular item to order but just point at the massive variety of things on sticks in the fridge.  Feel free to avoid the chicken heads and sheep testicles also popular at these places.  Pay a bit more and get a whole lamb shank grilled to perfection.

Eat all ten and feel like a proper "Beijing ren".  Though you would be excused to skip number 4.  How many have you eaten?  Have I missed anything?  If I have please do contact me, I'll just be out sipping on a cold YangJing and chowing down on some Chuan.  :o)
Posted by Berny at 10:10 71 comments: