﻿﻿﻿﻿﻿﻿﻿﻿﻿﻿﻿﻿﻿﻿﻿﻿﻿﻿﻿﻿﻿﻿﻿﻿﻿ ﻿﻿﻿﻿﻿﻿﻿﻿﻿﻿﻿﻿After the anti-climax of the eurostar we arrive in Brussels, the unofficial capital of Europe.  When you go to cadbury's world in Bournville the first thing you smell when you get off the train is actually chocolate.  In Brussels i swear to you the first thing you smell are waffles.  We took the metro to our hotel (yup hotel! im a working man now...ha), freshened up and headed out to explore and find dinner.  Our hotel was smack bang in the centre, just a minutes walk from the grand square (grand place - right).  I hadn't really thought about the great achitecture of Brussels but it really is massively impressive.  Detailed sculptures and gargoyles are all over the place hanging off most buildings that tower over the square.  Once we finished staring in awe at our surroundings we returned our attention to food.  First meal in Belgium couldn't be anyhing other than Mussels, which just about every restaurant happened to sell.  Mussels and fries don't really seem like they go together and well... they kinda don't.  Well they do and they don't.  They taste great together; the mussels are gorgeous and the fries are a massive notch up from our own.  It's more that they're not really a practical combination.  You can't mop up the juices from the mussel pot with fries.  But then so what.  They taste good. 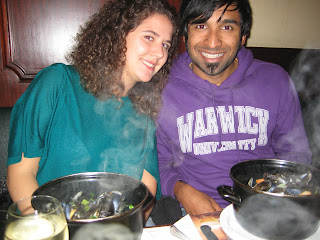 The next day had an awesome start.  I walked over to a big bus with a picture of a cake on it and a very nice lady (very very nice) asked if we would like to come inside and eat some cake for free!  You couldn't write a better start to a day.  Turned out that it was a taste test where we had to eat three identical looking cakes and fill in a questionnaire on our preferences.  We were even given free chocholate for participating!  After briefly pondering the potential of a new career path in food tasting i quickly got sidetracked onto the thought of breakfast. Breakfast ofcourse was waffles with chocolate sauce and cream... This brings to question a shared observation of Belgium; there are hardly any fat people?!  In the land of chips, chocolate, waffles and beer, girls and guys alike are stick thin and beautiful.
The first sight to see for the day was one of the most famous statues in Brussels... a little boy taking a pee (Manneken Pis - below).  Following the road signs we find a whole load of tourists with camer 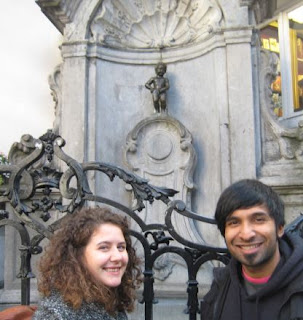 as crowded round what clearly must be Manneken Pis.  Having seen a number of pictures on post cards of the weeing boy a knew what to expect.  Or atleast i thought i did.  The first words from Batesy's mouth on seeing the boy was "its tiiiny!".  He was ofcourse talking about the statue as a whole, not what the statue was holding.  It wasn't just us as i am sure if we could read the minds of all the tourists around this boy (i'm surprised he could go with so much attention) there would be the overwhelming sound of "is this it?!".  At least we ticked it off.  We did a lot of ticking off and site seeing on foot in brussels; from churches and parks to the first ever shop to sell pralines. 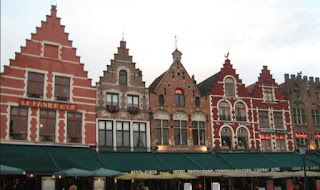 Early evening we caught a train to Bruges where we had two nights booked at a place called the Leopold.  We had our own little flat between four of us with stone walls and an old cottage feel.  All i knew of Bruges was from the film so i knew that there was a bell tower to climb and canal boats to ride.  Old cobble roads line the whole of Bruges with several churches, cathedrals and Bruges own unique architecture (above).

﻿We spent that evening drinking quality beer in a bar overlooking the canal and had dinner (snails and rabbit) in the market square.  Our full day in Bruges again was busy.  We climbed the Belfry (below left - in the background) which was a lot of steps but not as difficult as i anticipated (or as the film makes out) and the views from the top were pretty standard.  Bruges is pretty, seen from the ground or from up high. 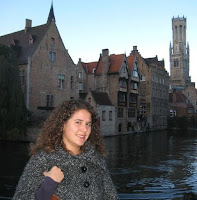 Theres something quite gothic about Bruges which i liked a lot.  We visited the Church of the Holy Blood, the gothic town hall and some other places which i forget their importance.  The canal boat trip was a great way to see more of the city and learn more of the history from the skipper/tour guide.  As Bruges is largely Dutch speaking in comparison to Brussels i learnt that there is another dish that needed to be had; Flemish beef in beer stew! That was dinner sorted and it was a damn good beef stew.  We found a great little bar just off the main square where we managed to drink our way through a variety of real belgium beers.  It came to a point where i was picking beers depending on the glass they came in.  There are some proper fancy beer glasses in Belium.  Kwak came in the most unique though rather pointless glass.  A glass that had a rounded bottom and so requires a wooden stand to keep it upright (below).  Pointless maybe but did it make the beer taste better? i'd say so! 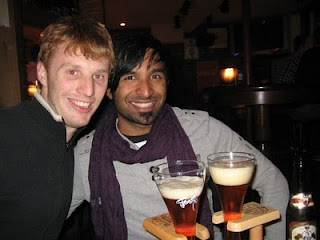 So we did mussels, we did beer, waffles and frites.  But so far chocolate had not come up so much and so we decided that a visit to the chocolate museum was necessary. ﻿ It was alright... we only got one piece of free chocolate. 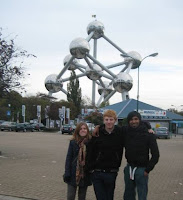 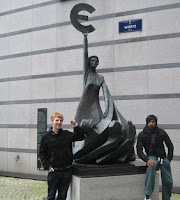 We had the train back to Brussels for our final night and we checked into our cheapest hotel in a slightly shadier area.  Beer was on the cards once again in a pub that had glasses (not pitchers!) that held 4 pints worth of Hoegaarden.  Our final morning we bought a group ticket for the metro and headed to the second tourist attraction (first being Manneken Pis) of Brussels; the Atomium (left).  It looks really impressive from the outside which is partly why the inside disapoints a little.  Each "ball" had some form of exhibition inside, one of which was the history of the Atomium which granted was interesting and made you wish that you were there at the time of the world fair.  The others however had very little relevance, if any at all, to the Atomium or even Belgium.  At the same time its one of those things you find on every postcard from Brussels (along with the boy having a tinkle) and it needed to be done.  Before heading back to England we had a quick visit to the European Parliament as Brussel's being the capital of Europe we can't really leave without seeing it (left - Batesy holding a pound coin)! Belgium was the ideal break away from the toils and troubles of the teaching life.  Good food, good beer and a nice view...  :o)