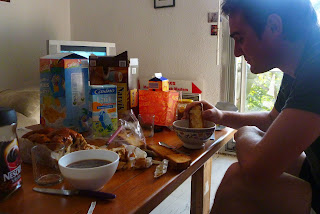 For a short few days i am in the South of France staying with my old French housemate, Romain, who is currently studying in Montpellier.  He has been boasting for a while how beautifully sunny the weather is here in the heights of Autumn and how last week he went bathing in the sea with temperatures peaking at 35C.  I arrived to high winds and it thrashing down with rain.  Either he is a liar or i have terribly bad luck.  Anyway, that was yesterday.  Today, as a weatherman would say, was relatively warm with sunny spells and a few patches of rain.  Breakfast was my first taste of the french culture.  I always love staying with somebody local whenever i get the opportunity to as straight away you are in with the local life.  It was a typical french (student?) breakfast.  Brioche and/or what would seem like extremely stale toast with jam dipped in a bowl of tea or coffee.  I do recall being amused by Romains surprise to the more usual savoury breakfasts in England (though he was completely converted by our signature Full English) but in hindsight, considering we're just across the pond, it is very different! 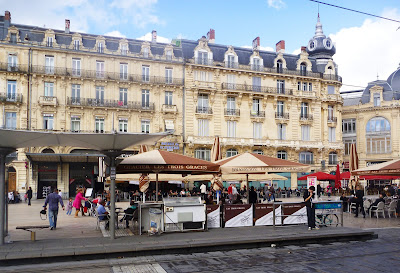 As Romain had classes today i was left to my own devices in the city of Monpellier.  He walked me to the city centre and pointed out the tourist information before catching the tram to University.  Now i can speak a very small amount of french to the point that i can make myself understood quite well but the problem is that i cannot really understand any response.  So i can convincingly say "bonjour Monsieur, ou est l'office de tourism?" at which they reply in French at a rate of 50 words a second whereby i have to look blankly at them and say "sorry i can't speak french".  Why bother even trying!?  Because their general response after that is "oh ok you go straight ahead, turn left at the post office and..." whilst thinking i'm some kind of weirdo that pretends to speak french.  Anyway, this happened a couple of times at which point i decided i might as well be a tourist and stick to English. 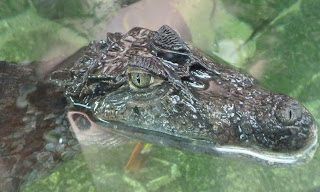 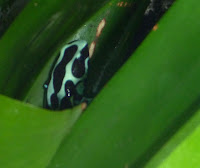 Using my map and new found knowledge from 'l'office de tourism' i made my way to the 2nd largest greenhouse in France, situated a tram and bus ride away.  I always enjoy these kind of things and spent a good few hours ambling around taking in the scenes whilst trying my best to avoid squelching my foot in dog doo.  Yup, this stuff is everywhere...  It's ridiculous, i can guarantee that before i leave France my shoe is going to sink into at least one steamy one.  I don't know if this is France or Montpellier or just a bad season for dogs but it is an impression of France that may stick to me (no pun intended).  It didn't effect my trip to the zoo though and i fully recommend the rainforest greenhouse thing.

On my way out a restaurant menu caught my eye as i read "Steak Hache a Cheval".  Cheval i know means horse and i definitely recall reading somewhere that the French are fond of eating horse.  The prospect of eating horse in France excited me and so you can imagine my disappointment when they told me that they had stopped serving food now (i asked in English and they responded in English, so much easier...).  I later learnt, after speaking with Romain, that had they been serving still my disappointment would have been far greater.  "Steak Hache a Cheval" does not translate to 'Steak a la horse' as i my brain read.  For some reason it translates to beef burger with a fried egg on top!?  Dis-a-pointing... 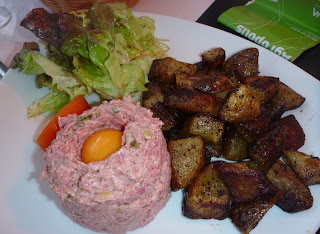 Still on the hunt to find the word Cheval on any other restaurant menu (prior speaking to Romain) i found the dish of Tartare de Boeuf coming up on most menus.  Now my only knowledge of this dish is from childhood watching Mr Bean attempting to eat it and forever wondering whether it is really that bad.  Today was my day to find out.  It came accompanied with a raw egg yolk on top, keeping with this whole raw theme it's got going on, with a side of roast potatoes.  Almost a french take on the American steak and eggs with chips except raw and already chewed for you.  Looking like posh dog food it was a surprise to taste rather pleasant.  The minced beef was dressed with chopped onion and pickled gherkin and had a texture of post-masticated smoked salmon.  Ok so i'm not selling it well.  I enjoyed it.  Enough said. 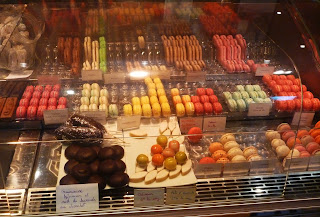 The next french delicacy was the Macaron (I haven't spelt it wrong, this is how they spelt it!).  Now i have eaten Macarons in England and i have eaten them in Amsterdam and could not for the life of me understand why they are always so expensive and why people like them so much.  So i decided to part with half my wages to give the macaron one last chance to convince me.  I realise now that the only place to eat a proper Macaron is here.  Wow, they are amazing.  I only bought 5 from a variety of 20 different types that were laid out like diamond rings in a jewelry shop.  I will be sure to go back for 15 more.  I don't even know how to describe them.  Like the best cookies you have ever eaten that will make your mouth dance and your heart sing.  They look like a work of art and must take absolutely ages to prepare properly.  I am 100% converted.  Macaron's are the don. 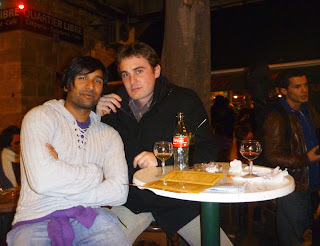 Soon after eating i had arranged to meet up with one of Romains friends.  Now when greeting someone in England it is usually the pretty standard and safe hand shake with the occasional confusion over whether you should go in for the hug.  In France it is cheek touching whilst making fake kissing sounds.  I don't get this and i am sure it is just me but i have always found this extremely awkward.  Precision is key as if you go in to fast you could knock them out with a head butt but go in to slow and there's that awkward moment of "wait are our cheeks even touching?".  And then which side do you go in for first?!  You don't want to collide on the same side cause you might as well just make out.   And then as if that was not enough, once you pass all those hurdles, you have to decide how many times you got to do it!  So on meeting his friend i went in for two and rejected her last kiss.  That's how i roll...  3 kisses?! That's 3 chances of looking a fool every time you greet a lady.  Like i need help on that front.  Anyway it has been noted, in Montpellier (yup, i am informed that it is different in other parts of France...), it is 3 kisses.  None the less she took me to see some great sites of the area before meeting up with Romain to finish the night drinking French wine in a local bar. 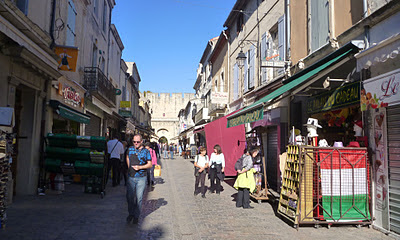 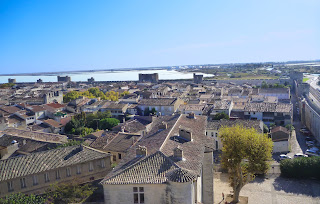 Wednesday was Romains Birthday, his day off university and about 25 degrees of pure sunshine.  Brilliant!  We drove to a place called Aigues-Mortes where there is a small city surrounded by medieval walls.  Apparently like a mini Dubrovnic.  Everything here is in place to cater for the tourist with a number of souvenir shops and overpriced Boucheries, Charcuteries, Boulangeries and Patisseries.  In fact these are not unique to Aigues-Mortes as they are peppered all over the place (Though normal priced verging on cheap) and are always busy with customers.  Its great popping into one of these and buying something i haven't seen before.  The charcuterie dedicates itself to prepared meats such as sausages, hams, bacons, pates, etc where as the Patisseries are full of pastries and sweets.  My favourites to nose around and buy something to eat straight away.  Among other delites, I had a sweet orange fougasse which is a soft fluffy bread founded in Aigues-Mortes. 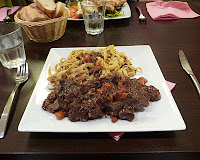 Yesterday morning Romain left Montpellier for Brittany so for the rest of my time here i was on my own. Well not really as his housemates were amazingly welcoming and i ended up spending the day with one of them and her parents on a day trip to Sete.  Sete is a thriving port and the hometown to the famous french postwar musician; Georges Brassens.  Of course i had never heard of him but he was clearly a big part of French history and his Museum was a welcomed activity on a rainy day.  Yup the weather didn't hold out for us completely but it wasn't awful enough to ruin our day.   I managed to tick another dish off the list with Beef Bourguignon in a local cafe.   A proper homely, wintry stew with great chunks of beef fat and slow cooked gooey gristly beef.  Nom... 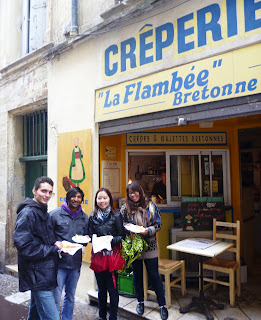 Back in Montpellier you can't help but notice that it is always busy. In the day the cafes are overflowing with people and their small cups of coffee and pastries and by night the bars are fully loaded with wine drinkers. Does nobody work here?  My final day was lent to Romains other housemate who, i kid you not, is training to be a tour guide.  You couldn't plan a better trip!?  So we and two couch surfers from Canada spent the afternoon learning the history and life of Montpellier.  Low and behold, my last day in Montpellier, i slid my foot through a perfectly positioned pile of dog shit.  After a brief moment of vexation i realised that it wasn't to much of problem at all as today i was wearing Romains shoes.  Mine were at home drying from yesterdays rainy day in Sete.  So everything really does happen for a reason!  And hey, i feel it wouldn't have been a proper trip to France if i hadn't sacrificed a shoe to the depths of the fecal abyss.  Though i have been to France a number of times this really is the first time i have been and really experienced France for what it is.  From Croissants to Wine and dog food to dog shit it was a half term very well spent.  :o)