Just a few weeks after Newquay and i am on another school trip, this time in the French Alps.  I am not too keen on writing up school trips so i will be keeping this brief.  It started with a gruelling 24 hour coach trip with 35 kids.  Sounds awful but i kind of enjoy having an excuse to sit and do nothing for a whole day.  A 100% guilt free laze.  The last couple of hours was a stunning (and a little stomach turning) meander up the Alps with our final drop off at "Hotel La Portette" in Les Orres.  After freshening up we spent the afternoon in a swimming pool on the beautiful mountain side.  The ideal past time after the long journey and mid 20's heat. 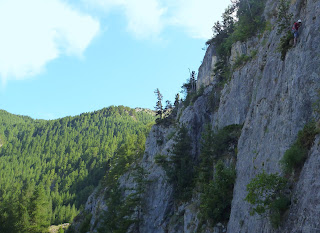 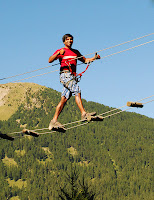 The Alps is famous for its winter skiing but the summer brings out a whole different load of activities.  The ski slopes become downhill mountain bike tracks for the mad with the ski lifts carrying the bikes and bikers to the top.  Our first activity was an adventure jungle with high ropes (left) feeling much higher being on the side of a mountain.  No time for me to be scared though as it was my job to encourage the kids that its all completely safe as i nervously lean out to prove that the rope will catch me.  This ended up being a common theme throughout the trip as after a quick lunch back at the hotel we had an afternoon of rock climbing.  We had to walk a good half hour up a mountain before we could even start climbing.  It is certainly a little scarier climbing a rock which base is already pretty high up.  Nonetheless, with little judging eyes watching, i got up there (above). 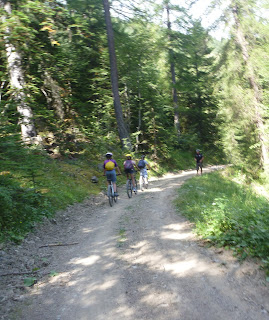 One busy day followed by another.  The coach took us to the top of a mountain where mountain bikes awaited us.  A 2 hour down hill dash took us through villages, past farms and over streams.  Out of all the activities, if there was going to be an accident, it was going to be this one.  And yet this was the one which the kids were least scared of!?  At one point the instructor stopped us at the top of a slope and said in broken English "this hill has many bees".  Bees? I wrongly presumed that he made a mistake in his English.  Could this get any more extreme!?  Damn it was fun though.  My backside was sore for days after but completely worth it. 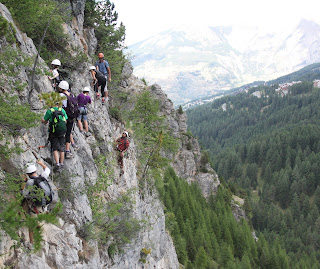 As if a 25km bike ride was not enough for a days work we went on to do a Via Ferrata in the afternoon.  I had never heard of one of these before.  It is the Italian name given for a climbing route across a mountain face aided with metal staples.  Aided with metal staples because it would be completely impossible to climb the flat vertical rock face without them. Now this was scary!  Oh my days it was scary.  Forget staying strong for the students, i had a full sized turd in my pants.  Some students refused point blank before starting, many gave up half way (and had to abseil down) and the rest braved the whole thing.  I managed the whole exhilarating experience and lapped it up.  It was amazing. 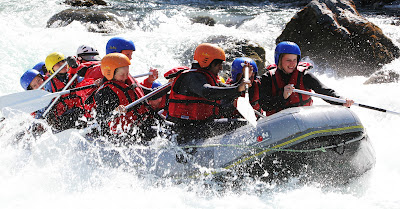 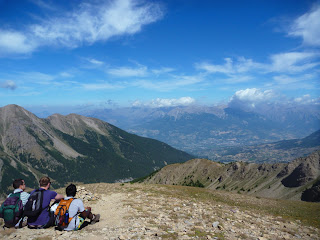 The rest of the week involved white water rafting, chilling on a lakeside beach, roaming around towns and a 6 hour mountain trek.  The lake beach had a brilliant inflatable park with trampolines and icebergs to scale and jump off.  An hour playing on that with the students really takes i out of you.  I was shattered and had a proper lakeside snooze after.  For the mountain trek we took the chairlifts to the top and hiked back down with a picnic stop half way.  A real french picnic of wine, cheese, baguette and pate munched sat next to an aqua blue mountain lake.  Perfect!  Other than this, food took a back seat on this trip and pretty much acted as fuel for the energy draining activities.  A medley of ham, cheese, baguettes, croissants and cereals made breakfast.  Lunch and dinners ranged from steak hache to tartiflette.  So pretty good french fuel on the whole!  The trip was fantastic and I genuinely don't think i would have enjoyed it as much as i did if there weren't any students.  It's a bit like having children round for Christmas.  Their excitement makes you excited.  The French Alps are breath taking in the Summer and i am massively looking forward to coming back in the Winter to slide down some slopes on yet another school trip.  Love it.  :o)