Starting in Jordan, me and Jane have done a lot of travelling together as a pair and despite our best attempts only occasionally do we manage to convince others to join us.  This time we decided not to bother.  We'd just plan it as a pair; it's a big trip after all and we luckily have very similar interests.  Four people ended up joining us; two more friends from work, my brother and his wife.  This will be interesting. 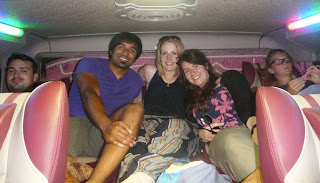 After just a single day in busy Hanoi we found ourselves horizontal for 27 hours and 43 minutes aboard a sleeper bus to Luang Prabang, Loas.  It sounds absolutely gruelling.  It wasn't so bad.  Novelty probably played a large role but the beds were soft, quilts were provided and the bus was air conditioned and largely empty enough for us to have a double "bed" each.  Amazing, they need these in England! 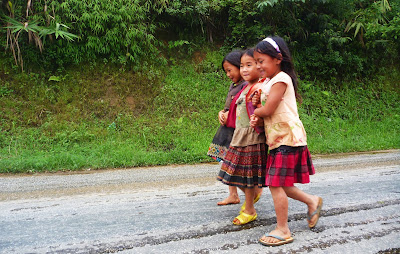 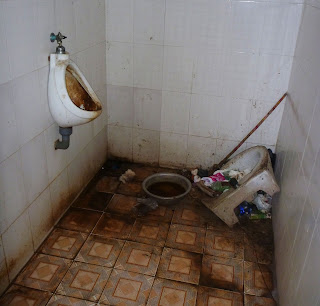 It's a beautiful mountainous and scenic route that is not without its bumps and bends big enough to make your entire body airborne for a couple of seconds and land in a different bed.  I'm a good sleeper so it was not a problem.  You can't help, however, but to grip onto something as the bus takes the tight overhanging turns with a driver that has singularly been going at it for well over a day now.  Rest stops to replenish and release pressures were plentiful but it was on this journey that we encountered the worst kept toilets known to mankind.  It was the Vietnam side of passport control and my first attempt had me running out gagging from the foul stench before even undoing one button.  I had to do this tactfully.  With buttons pre-prepared, I inhaled deeply and aimed to hold my breath through the entire flow.  I had drank a lot of water, and I cannot hold my breath for very long; it was not a pleasant experience.  Please note that if you do make this trip, much nicer toilets are on the Laos side of the boarder ("much nicer" doesn't by any means mean nice). 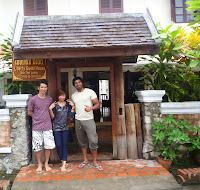 We arrived at 9pm to a lovely Liberty Guest House run by a wonderful brother sister combo.  We were starving and after a quick wash we left for the town to find that everywhere was preparing to close.  By 11pm we were walking home from a ghost town.  We soon learnt that Laos has its slippers on by 9, in bed by 10 and is sound asleep by 11.  We went to bed on a belly of peanuts, crackers and beer and so desperately looked forward to breakfast. 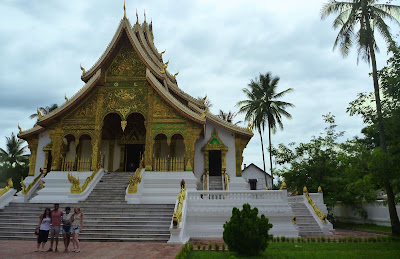 The morning brought pork noodles (nothing to really write about) and a walking tour around the centre through museums and markets.  It was here where we found our first culinary delight of Laos.  Nestled away in a honeycomb structure, a wrinkled old dear was selling some kind of grub.  I handed over the smallest note in my pocket and she offered me a handful.  I took two and gestured the rest back.  By this point the other market vendors were highly entertained and were looking forward to our dramatic screams and dances as we munched.  It didn't happen, they weren't so bad; a bit of an unpleasant pop of almost tasteless gunk.  A whole handful in one go may have been a different story but just the one will do me.  We spent the main part of the day at Kuang Si Waterfalls swimming in the pools and being nipped all over by tiddlers; like being in a full body fish spa blindfolded.  Sounds horrible but it made for some exciting screams from the girls when the occasional big one came along and I managed to come out feeling cleaner than ever.  Easily the best waterfall I have seen and climbing to the top gave us some impressive views. 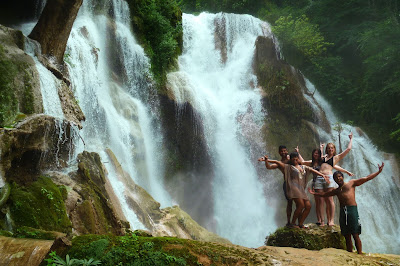 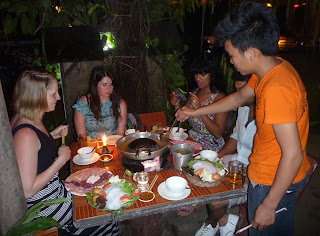 Dinner was at LaoLao Gardens where we experienced the traditional Lao barbeque.  Here you are provided with raw goods and hot coals in the centre of your table.  Fun over flavour but well worth it and I left wanting one of these tables in my garden.  By 10pm Laos was closing up, but, we had heard from an unnamed source that there is in fact one place that does remain open pass the local curfew... the bowling alley!  The perfect end to a brilliant day. 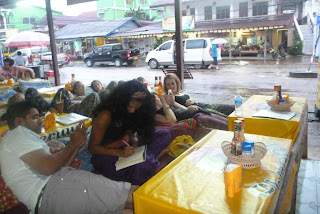 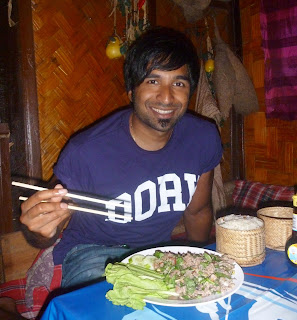 We took an 8 hour (should have been 6) bus to VangVieng again via beautiful scenery and wee villages.  The bus broke down twice and we had to wait for another bus to be pulled from hanging off the cliff edge and back onto the road.  But not to worry, VangVieng is thee antidote to all of life's problems.  Sitting back on halfbeds(that's what I'm calling them) with food and drink on order and the entire series of Friends playing in a loop; It genuinely doesn't get more chilled than this.  It is a sleepy town that has been taken over by a tourist tidal wave.  I love it now but I can't begin to imagine how tranquil it was before the multi-storey hotels and bars started to appear.  But hey there would be no 24/7 Friends playing so its swings and roundabouts really.  Across the road from our hotel we sat on the floor around a table and ate the Laotian national dish; Larb with stick rice (Fun fact: Lao people are the number one sticky rice eaters in the world!).  It is a minced pork salad flavoured with fish sauce, a little spice and powerful, fragrant herb leaves.  The result is quite a dry, bland dish which gave me food envy over my brothers succulent roasted pork.  It is another one off the list though! 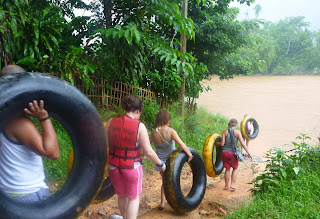 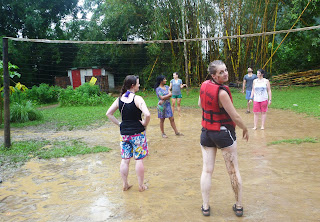 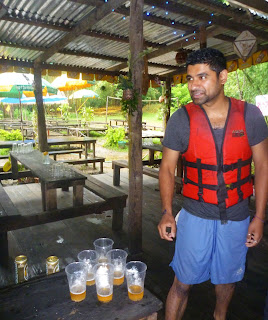 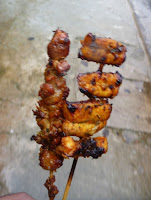 Tubing is what put Laos on the backpackers map and has been largely controversial over the last few years due to many drink/drug related deaths; a complete contrast to the uber chilled life of Laos.  It was still enough to give us butterflies and accept the life jackets when picking up our tractor inner tubes.  It was a rainy day, the water was going pretty fast (noted that what usually takes 3 hours in the dry season was going to take us just the 1!?) and it was nowhere near as busy as Google images made out.  The tuktuk drove us and our tubes up river, dropped us off and left.  No instruction, no direction, not even a good luck.  Though my pictures make it look like the worse day to go tubing ever, it was the rain that made it such a good day!  We had sooooo much fun playing beer pong in the bars and volley ball in the mud.  The skeletons of old closed down bars remained on the banks but there were still a few open.  We learnt that in this season it is important to make sure you are on the correct side of the river early enough as we drifted by at least two bars that we tried to frantically swim towards (video below: my bro and his wife trying to get to the bar that we were waiting at).  We had a great time and were properly buzzing afterwards.  The walk back from tubing is dotted with street BBQ's selling amazingly cheap and tasty pork and chicken skewers.  I got a few skewers of chicken hearts and then managed to grab a few more sticks of meat from every BBQ vendor we saw. 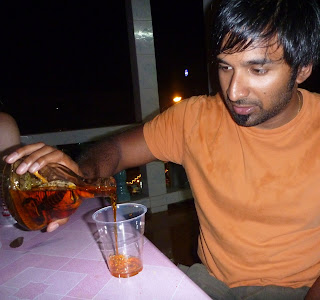 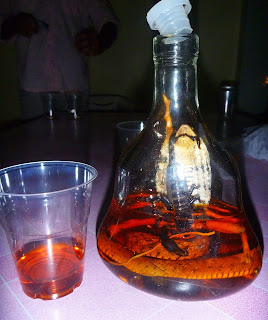 This was our last day in Lao and the evening saw us buying a bottle of special local brew so I could tick off one of the main reasons for my being here.  To down a shot of snake laoLao; a potent rice whisky given an extra kick by macerating a snake and scorpion within each bottle.  One of the items I was least looking forward to on my list.  We each poured ourselves a shot, counted down from 3 and then threw it down the back of our hatch.  Well all but two of us did, one of which included me.  The second I raised it to my mouth, the stench of putrid fish sauce pulled my brain through my nose and shoved it down my throat.  My brother headed straight for the balcony and threw up and the others just stood there, pale faced, in shock.  Lao people don't drink this!! Do they??  After what seemed like an hour of staring into my shot glass, with a plastic bag lined bin pulled closer, I held my nose and knocked it back.  Blurgh...  Scorpion or no scorpion, officially the worst tasting drink ever.  The perfect end to our time in Lao?  No, not even close, but it had to be done.  I have a list and I'm sticking to it!  And so it is, Lao in a nut shell.  We simply got a snapshot of the laid back Laotion life style and their simple, no hassle food with sticky rice.  A 4 hour night bus takes us to the capital, Vientiane, where we fly to Cambodia.  I love Lao! :o)