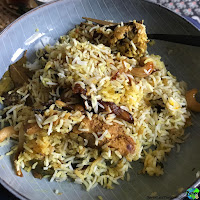 I never realised the delicacy of a proper Biryani until my trip to India.  Firstly, I learnt that it is not a side dish! I think that I had only ever eaten it as a fancy add on instead of rice, but truth be told I don't think it ever really was proper biryani. At Hotel RRR in Mysore they served nothing but biryani and a few side dishes, alternating chicken and lamb each day.  It was carried in giant bags on the waiter's shoulders and poured directly onto your table (lined with banana leaves) for you all to tuck in.

It is not simply rice and curry mixed together. It is a lengthy process that takes dedication and a good spice rack.  For this reason, most restaurants in England will make it completely incorrectly to save time, which results in a dish nowhere near as satisfying.  Like microwaving a jacket potato instead of baking it slowly; it makes ALL the difference.  Each individual grain of rice should be oozing with the most amazing fragrance made up from all the whole spices that have helped steam them.

Choose your cooking vessel carefully. It needs to be big enough to fit everything in and be able to go in the oven.  It also needs a tight fitting lid so the perfumed steam doesn't escape and so cooks the rice.  Some people use chapatti dough to seal the lid properly but foil works too.  I find that my cast iron casserole dish works perfectly.  It can be made on the stove but I have learnt the hard way that this method has a greater chance of burning the bottom before the rice on top is cooked.  So here are your 10 steps in making the perfect biryani.

1 large potato quartered and parboiled
4 boiled and peeled eggs (common with chicken biryani)
1/2 cup Cashew nuts
Couple pinches of Saffron (or cheat with a couple of drops of red food colouring mixed with 2 tablespoons of water.)


1. Dry rub the meat with the ground cumin, coriander, turmeric and some salt.  Wash and leave the rice to soak in water.  Set both aside for an hour. 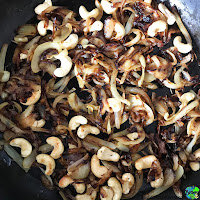 2. Start frying four of the sliced onions in a separate pan with a bit of salt to help caramelise them.  These dark caramelised onions will be sprinkled on top of the biryani and will take a long time to get to the colour they need.  So start now and hopefully they will be done when you are ready for them. Once they are almost done, add the cashew nuts to brown slightly. 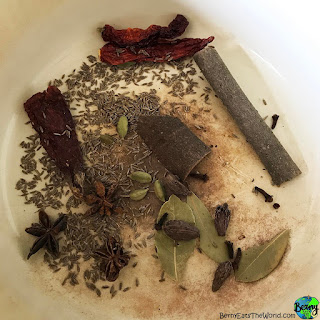 3. Add half a cup of oil in the pot that you plan to make your biryani in.  Throw in 2 star anise, 1 cinnamon stick, 4 cloves, all the cumin seeds, 3 black cardamom, 4 green cardamom, 5 peppercorns, 3 chillies and 3 bay leaves.

4. Fry until fragrant and then add the two remaining sliced onions and the split green chillies. There should be enough oil in the pan to fry everything properly rather than steam/boil them.

5. Fry the meat in a separate pan until brown and transfer to the main cooking pot. 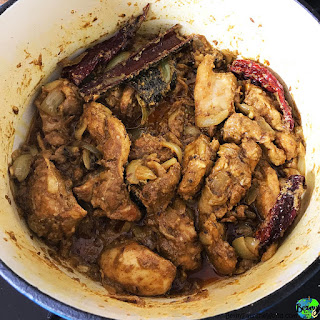 6. Add the ginger and garlic pastes.  Give it 5 minutes and then add the yogurt (put the parboiled potatoes and/or eggs in at this point too).  Cook it through until the oil separates and the meat is soft.  We shouldn't have too much liquid so cook down until the sauce is thick. 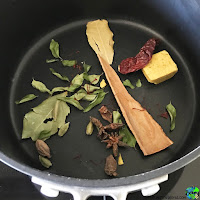 7. In another pot add the remaining whole spices plus the curry leaves.  Fill with water and bring to the boil.  Add salt (or a chicken stock cube!) and add the rice. Only half cook the rice so it is still a little hard before draining.  Keep a cup and half of this drained fragrant rice water for later.

8. Now it is time to construct!  Remove half of the meat mix from the biryani dish.  Layer half of the rice over the remaining meat in the pot.  Sprinkle with a few leaves of saffron (or your food colouring!) and add the rest of the meat mix layering it evenly. Top with the rest of the rice and sprinkle over the remaining saffron. 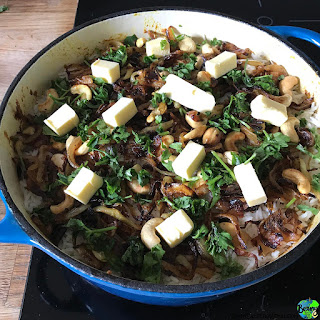 9. Top it all off with the caramelised fried onions(and cashews) and the chopped fresh coriander.  Place cubes of butter on top and pour in a cup and a half of the saved rice water.

10. Finally bake for 40-50 minutes on gas mark 4. Test a few grains of rice; if still a little raw, add half a cup of water and put it back in the oven.  Rice on the edge of the pot may be crunchy but that's fine - it all adds to the overall texture of the dish!

And that's it!  Your whole house smells like an indian restaurant and your hair is greasy with a fried onion stench but it will all be worth it.  It is a lot of work and so only really worth it when making a lot of it! In hotel RRR a biryani is served with a basic vegetable sambar or onion Raita with sides of salty pickles, deep fried crispy chillies, a couple of lime wedges and raw sliced onions.  Don't make the mistake of serving a heavy curry with it; the biryani is the star of the show and doesn't share the limelight well. Enjoy!
Posted by Berny at 22:08