My brothers send off before pad locking the ball and chain was a messy lads holiday in Las Palmas, Gran Canaria.  The good old stag do stretched out over 5 days.  I have already decided that this is not a holiday, this is damn hard work! I think i may actually need a holiday after to get over this one.  Just two heavy nights in and i am flagging big time.  We are housed at Jardin del Atlantico; an enourmous, cheap but cheerful, hotel with 3 swimming pools and busy bars a stones throw away.  I will let you decide whether that is a positive or negative but i find it a more than satisfying stay.  The group arrived sometime last week but my teaching duties meant I had to join in late touching down saturday evening.  Drunken stories and interesting feats from previous nights were all the talk of the day and i started to realise what i had really let myself in for.  Now I wouldn't call myself a big drinker but digging deep my university days are still in me somewhere...  but 4 nights in a row!? We shall see.  The evening was spent by the pool as many were still getting over the night before and i had to prepare myself for the nights to come.  That night the stag theme was wig night; one of many themes planned for throughout the holiday.  A brilliant night was had in a club called China Whites where a round of drinks cost around 50 euros and everyone tried to pull of your wig.  Well apart from my brother's as his wig  looked real and made him look like James Brown (below). 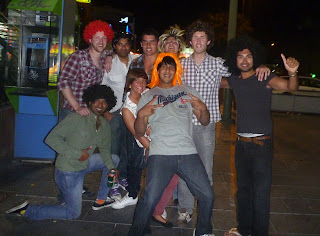 It is interesting as meal times are very different here; breakfasts tend to be eaten around about lunch time, lunch is eaten at dinner time and dinner is eaten at 5am in the morning.  A strange concept i know but i am getting use to it.  I would like to tell you all about the exotic Spanish food i have been eating but so far i can tell you that the kebab wrap special last night was possibly the best tasting kebab i have ever eaten (or so i thought at the time) and that the famous Canarian speciality of spaghetti mixed with pan fried baked beans and sliced poached tinned sausages went down a treat.  All homemade ofcourse!  I am in the most touristy part of Gran Canaria, good food isn't anywhere to be seen.  We have hobs in our rooms and cooking for 9 seems to be the prefered way to fuel up. 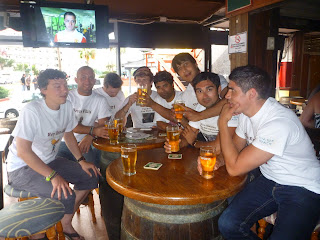 After a late rise we had breakfast and headed down to the beach where everyone chooses to bake themselves, with everything dangling, under the midday sun.  The beach next door was of the nudest kind and some tended to spill over.  The sun really does scream down as the beach was absolutely filled with peeling backs and grilled lobsters and in just a few minutes i could feel my African blood coming through.  We walked down to the sand dunes where random naked men tended to hang out (pun intended) and the sand was so hot I liturally burnt my feet dancing on it.  Fighting to stand in eachothers shadows we found the best solution was to sit down and let our backsides take the punishment (above).  The whole day on the beach followed by the gourmet spaghetti meal prepared us beautifully for our next night out.  Personal t-shirt night!  The t-shirts were all designed to have a famous lookalike of the wearer on the front and the stag on the back.  Well everone elses t-shirt had a famous lookalike on the front, mine was just a random picture of Mowgli from The Jungle Book!? 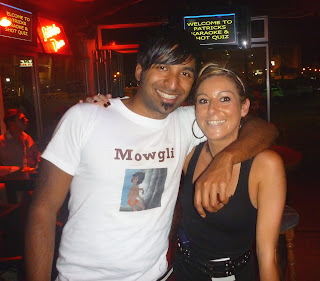 Every bar has skimpily dressed pretty ladies to coax you in (above) which is annoying because in the few seconds it takes you to realise, you think maybe, just maybe, you've gained some pretty ladies interest!  You havn't.  We started the night watching the Manchester United vs Barcelona match and as the majority of tourists here are Spanish we figured that picking the Irish Murphy's bar would be less risky to cheer for the opposing team.  This is lie. Murphy's bar had the better looking lady to lure us in.  After the match the night kicked off with my brother having to perform various acts for his stag duties and then we found a bar, called ZigZag, that was 10 euros for all you can drink... and then I woke up for breakfast.  I think that's how it went? 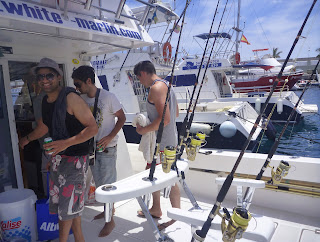 Who would have known that Gran Canaria is one of the top spots for Blue Marlin fishing in the world!?  Well in August it is but we thought we could try our luck.  It was 500 euros to charter the whole boat which split 9 ways isn't so bad and this included transport to and from our hotel.  Marlin can weigh upto 1800kg (but are typically around 500kg) and so calls for a completely different fishing method to what i am use to.  Rods with fake squid lures hang off the back of a big sturdy boat and the Marlin are apparantly attracted to the wake caused by the boat as we trawl along.  Just getting onto the boat filled me with excitement with the thought of hooking a Marlin.  Its like every serious fishermans dream catch!  The skipper told us that  he would regularly have one person charter the whole boat just to bag themselves the prized Marlin.  All we had to do was sit and wait.  We decided that we will trawl for half the trip (for Marlin, Dorado and Tuna) and then switch to the fishing i know and love for the second half.  Relaxing on deck with beers and sandwiches is great.  We were treated with shows from the odd flying fish gliding past us and then a school of Dolphins that swam right up next to our boat!  Brilliant! 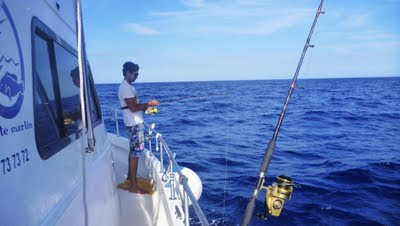 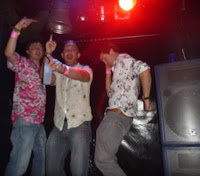 If only we were as lucky with the fishing.  No game fish took our bait.  Infact after switching to bottom fishing; not many other fish were interested either.  Over 6 hours we caught two small fish between 9 of us.  But our luck wasn't out yet! On the way back we saw whales!! Jumping right out of the water.  Now if we were on the dolphin and whale watching excursion could have saved a packet.  Well i say this in jest, fish or no fish, i love the thrill and anticipation involved in angling.  If i were to return to Gran Canaria it would be purely for some Blue Marlin fishing.  This time in August.  The whole afternoon spent on the boat left us golden brown, shattered and some of us a wee bit queezy.  Not at all prepared for our Hawaain shirt theme night.  A wise decision was made to start our night at 10 euro ZigZag, charge our batteries there and then head on to China Whites after.  Worked a charm! 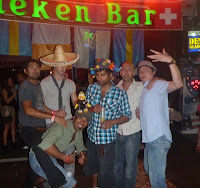 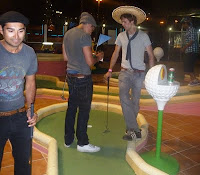 Yesterday was our last full day so we thought we would do something productive.  We spent the whole day on the beach.  Ha, we did other stuff aswell.  We played frisbee, attemped to snorkle and a few more stag pranks were played on my brother (one involving a mankini) but in the end we did laze around a lot.  It was neccessary, for the last 3 nights (5 nights for most of them) we have rolled into bed no earlier than 4am and we still had hat night to come.  Luckily for us, this time we found a bar that was 5 euros drink all you can! 5 euros?! We were actually offered 3 euros at another place but decided that there must surely be something wrong there.  Infact at 5 euros, it was hardly going to be Russian standard and aged.  And besides, the 5 euro bar had pole dancers.  Before hitting the bars we had a casual round of crazy golf where we managed to win a "Bert" teddy from Bert & Ernie.  This was particularly funny because when we had our personal t-shirt night, one of them actually had Bert on the front of it!  What's the chances of that!? On our last night, we have found a stag do Mascot.  "Hey Bert". 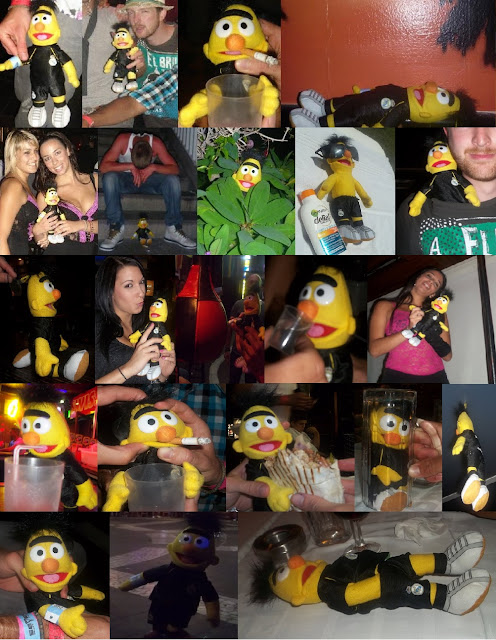 So aside from the national dish of spaghetti, beans and tinned sausage, the closest thing to eating (drinking) locally would be a small glass of Sangaria.  And i think thats even stretching it to call it local.  But come on, some outstanding experiences make up for it big time and it was simply just great fun to chill with my brother and his mates.  After 5 days and 4 nights of sun, sea, sand, and sangaria it is time to say goodbye to Gran Canaria and hello to 4 days of pure sleeping.  :o)
Posted by Berny at 20:57